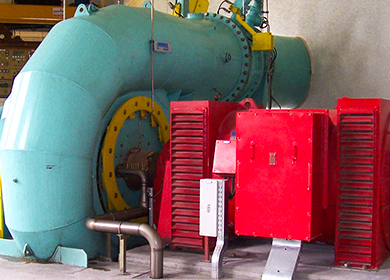 Coldimosso (Turin) power plant
Located in Susa (Turin), this is an interesting example of industrial archaeology dating back to the beginning of the 20th century which makes use of water from the Dora Riparia River.
Following the revamping done in 2007, the two production groups, with two horizontal axis Francis turbines have an overall power of 3,200 kW and an average production of 16 million kWh per year. 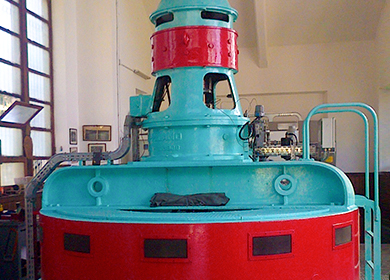 Campignano (Bergamo) power plant
Located in Parre (Bergamo), it uses water from the Serio River in Villa d'Ogna (Bergamo) and dates back to the 1940s.
The hydroelectric unit is made up of a vertical axis Kaplan turbine with installed power of 1,560 kW and an average production of 8 million kWh per year. 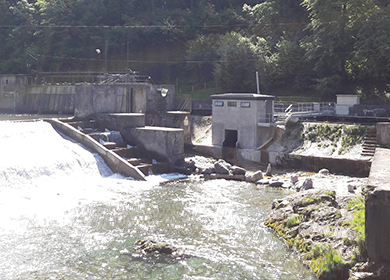 Campignano (Bergamo) MVF power plant
Located in Fontanino, in the municipality of Piario (Bergamo), it was finished in 2017 and uses the minimum vital flow of the Campignano hydroelectric power plant.
The hydroelectric unit is made up of a vertical axis, double-regulated Kaplan turbine with installed power of 50 kW and an average production of 350,000 kWh per year. 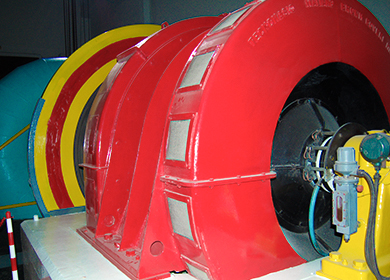 Cunella (Bergamo) power plant
Located in Villa d'Ogna (Bergamo), it uses water from the Serio River in Ardesio (Bergamo) and dates back to 1960.
The hydroelectric unit is made up of a horizontal axis Francis turbine with installed power of 1,380 kW and an average production of 7.5 million kWh per year. 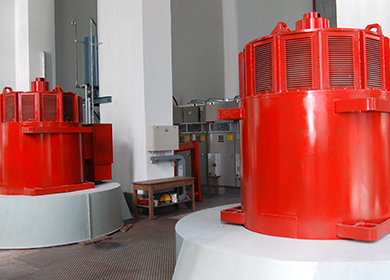 Lenna (Bergamo) power plant
Located in Lenna (Bergamo), it was built in 1937 and renovated in 1998. It uses water from the Brembo River in the municipality of Olmo al Brembo (Bergamo).
Following revamping in 2006, the hydroelectric unit is made up of two vertical axis Francis turbines with a total installed power of 3,600 kW and an average production of 18 million kWh per year. 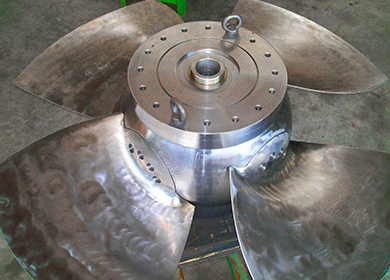 Molino Nuovo (Pavia) power plant
Located in Ferrera Erbognone (Pavia), the power plant was completed in November 2010 and uses water from the Agogna Stream.
The hydroelectric unit is made up of two S-type Kaplan turbines with installed power of 1,560 kW and an average production of 6.5 million kWh per year.
Cogeneration

The Geogreen production facilities also include the Novel cogeneration power plant (with 49% ownership; the remaining 51% belongs to the Alpiq Group). 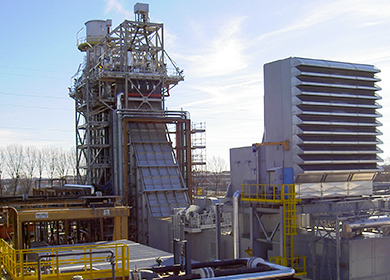 Novel Power Plant
The power plant, built in 2004 and located in Novara, is certified as a High-Efficiency Cogeneration (HEC) plant according to the highest energy efficiency standards.
Supplied with natural gas, it is made up of a plant for the combined production of electricity and steam (cogeneration) based on the modern turbogas-turbosteam combined cycle technology. It has an electrical power of 105 MW (71 MW Turbogas and 34 MW Turbosteam) and is capable of producing approximately 700 GWh/year of electricity.
Of this, about 80 GWh/year is transferred to Radici Chimica SpA, a RadiciGroup company.
The remaining power is inserted in the national grid to be sold in the Energy Exchange or used by other RadiciGroup facilities and Geoenergie customers.
The over 600,000 tons of steam produced per year is transferred, in its entirety, to Radici Chimica SpA, to be used in the production cycle.
In this manner, Radici Chimica SpA reduces emissions by approximately 35%, thanks to the advantages of cogeneration, which are combined with the use of advanced technology and the reduced environmental impact of natural gas.
This website uses it own and third-party cookies, including profiling cookies, to enable us to send you content and proposals in line with your navigation preferences. For more information or in order to deny your consent to the use of selected or all cookies, click here. You should be aware that, if you continue to browse this website, either by scrolling this page or accessing any element of this page, you consent to the cookies.
Close